Judged by Action and Not by Intention 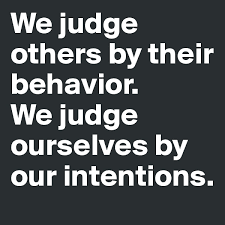 Each belief you hold either empowers you to reach greatness or it inhibits you. Each leader within the best companies in the world has chosen to hold true the beliefs of excellence, and reaped the rewards. Their testimony is, hold the 10 beliefs of excellence as true and you too will embrace your potential. There is however, no belief that evokes such an emotional reaction as the one we discuss here: BEHIND EVERY ACTION IS A POSITIVE INTENTION.


Without fail, resistance is the initial reaction to this statement. People are so programmed to judge and condemn others purely on the basis of their actions, that very few people are willing to reserve the judgement until they have discovered the intention behind the action.


What makes this so ironic, is that when people make a mistake, or do something to hurt or offend someone else, you will often hear—"I am sorry, that wasn't what I meant! That wasn't my intention!" People will quickly judge another's actions. Yet, when they are at fault, they call the jury to judge not just the action, but they want the jury to be patient, hear and evaluate the intention too.


By accepting this statement as true, you cause a delay in judgement, and await the hearing of the all important intention. Does this mean that we should justify all bad actions on the basis of intention? Not at all. I am not approving bad behaviour! I am enquiring what drove someone to do the bad behaviour. No one intentionally acts in a manner that it will be a "lose-lose" outcome for themselves. Even suicide bombers overcome their fear of pain and death for the promise of the great rewards in the hereafter.


I am not asking you to track down every terrorist in the world to uncover the intention behind their rotten actions. What I am asking you to do, is that when a friend or a colleague, does something to offend you, that you take some time to discover the intentions behind their actions. When you hold this statement as true, you become a little less sensitive about what is said, about what is done. You become a little less sensitive about criticism. You develop a thinker skin (yes, a thinker skin—think about being thick skinned or not!). You become a little more patient. But most of all, you start to open the channels of communication.


When I am less sensitive, when I am less defensive, I open the channel of communication to those around me. I become a learner. A learner that is clear about the intentions that drive actions. I become a learner of the intentions that drive criticism. Surely this is a good mind set to have? Surely this will afford me the opportunities to grow emotionally and spiritually? When I look at some thing that someone has done, and I ask "What was your intention by doing this?" I open the doors to a whole, previously unseen world of understanding.