There is no failure... 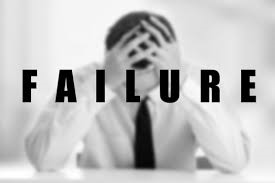 There is no Failure...


Thinking that we are failures is the most common thread amongst us as humans. It’s not when we don’t learn from our failure, but rather, we make it an identity that we base our character on—that we as humans become true failures. This is not the way


As shared in part one—A survey of the Top 500 companies in the world revealed that they share a common denominator. All 500 companies hold the same, or at least very similar, beliefs of excellence. Furthermore, they are convinced that by applying this formula, any person or business will be able to duplicate their excellence.


The first couple of these beliefs was: THE MAP IS NOT THE TERRITORY and PEOPLE WORK PERFECTLY. The third belief is: THERE IS NO FAILURE—ONLY FEEDBACK!


If you swing and miss the golf ball completely - you have not failed - you have simply experienced what it is like to miss a golf ball. As this skill hitting a golf ball correctly, requires practice and sensitivity, failure does not come into the equation. Most skills and behaviours require a certain amount of practice before we can claim that we have perfected it, and we give ourselves permission to fail while "rehearsing" in order to develop the required techniques. So-called "failure" is the only way to excellence.


Failure is part of the process of perfecting the skills and behaviours we desire. This ties in well with the previous belief, and gives us permission to make mistakes. By making a mistake, I do not become a failure. I do not assume the identity of being a failure be-cause I made a mistake. I simply made a mistake. I have the freedom and the right to make a new choice, or to continue practising or to do what ever it will take to make a success. With each new adventure in life, with every new skill I must learn, with each opportunity presented to me, comes the real possibility I might not be successful.


Thomas Edison (It's a cliché, I know) made numerous bulbs before one produced light. Einstein failed a specific maths level at school. Michael Jordan was kicked off his school basketball team. Walt Disney was sent to the principals office because he insisted on "drawing silly faces on all the pictures of flowers". Each one of these people suffered set-backs that they had to overcome.


Thank goodness that they did not give up, defeated by their failures. Thank goodness that they learned from their mishaps, and turned them into success. Failure is part of the very nature of experiments. Moreover, the reality that each new experiment designed and initiated could fail is a large part of the scientists thinking. This does not prevent him from doing his work. The story is told how Ghandi asked himself two questions each day. The first, what did I learn today? The second: How can I improve because of what I learned? Instead of giving up, ask questions concerning the mistake or failure. Ask ―What did I learn from this? ―What can I do to make it better?Learn from it and grow.

at 7/18/2015 07:48:00 am
Email ThisBlogThis!Share to TwitterShare to FacebookShare to Pinterest
Labels: Beliefs, Growth, Leadership, Management, Mind Mutter, Motivation, Self Development, Self Help, Self Talk, Success, Training